Promote Your Page Too

Earlier this year roughly 50,000 stolen iTunes accounts were posted to a Chinese online auction site with prices ranging from 15 cents to $30 each. Many forms of attacks can be leveraged in acquiring passwords such as these through covert means, but almost none provide such a straightforward plan of attack like Phishing. Phishing, like many other forms of modern day email spam, is a form of social engineering aimed at acquiring sensitive information by attempting to fool users into freely surrendering passwords, credit card information or other potentially valuable information. Most current day attacks come in the form of an email seeking users to verify their account or billing details. These social engineering attempts often utilize pixel perfect facsimiles of websites or newsletters in order to gain a user’s trust. That’s where this phishing proof of concept gets its cue.

The Pitch
The first step of the attack comes in the form of utilizing a botnet to send out a fake news article using the default styles of a legitimate shared article. These emails often use minimal styling and shortened URLs making a fake shared story almost impossible to distinguish from a real one. 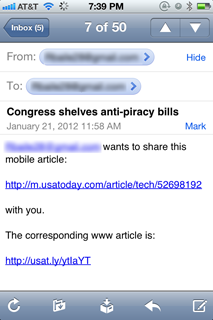 The Hook
The user is then taken to a fake mobile version of the news article where the user is able to browse the page as they normally would. The only clue to the fake at this point is the URL in the address bar which can easily be spoofed with either a shortened URL or a misspelled domain name. 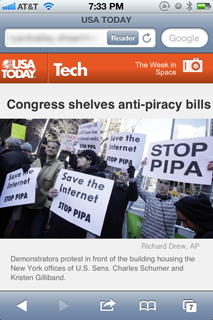 The Bait
After a certain amount of time, an iOS alert pops up to inform the user that the iTunes Terms of Service has changed. Normally users are only prompted to accept changes after attempting a download from the iTunes store. But as anyone who has owned an iPhone will attest to, these changes often stand in the way of desired actions and often are accepted without a second thought. By delaying the bait until after the user has begun to read the article, it stands to reason the users will simply accept the thought of accepting the new Terms of Service without second thought. 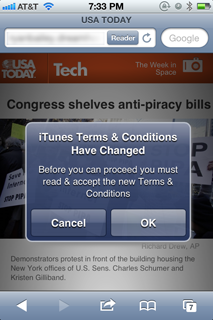 The Switch
The users, after having clicked through to accept the changes, are taken to a facsimile iTunes Store Terms of Service page where users are given bogus information about the update they are about to agree to. This view of removing the standard Safari title bar is easily accomplished through several frameworks designed to perfectly mimic the iOS user interface. 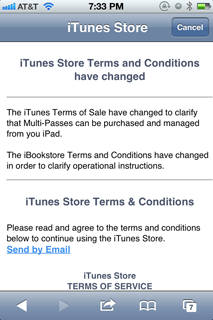 The user scroll to the bottom of the fake Terms of Service to the realistic “Accept” button where upon clicking pops up a copy of the iOS Username and Password Prompt.  After entering their username and tapping the “OK” button, the user can be forwarded back to the article being none the wiser to their personal information now being in the hands of the highest bidder. 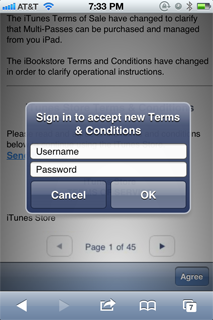 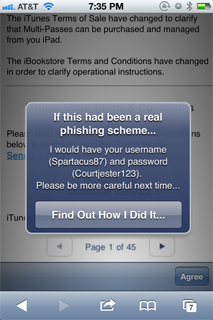 This exploit brings up the interesting thought of educating users to how interfaces conduct their primary routines. Potentially, the only way the users could be warned of the fact that this is a scam would be through the fact that iTunes never asks for users to accept a Terms of Service update through a Safari window. This proof of concept was done in only a few hours but could easily be made almost undetectable through the use of an app slipping through the approval process at Apple or just even more advanced and malicious Javascript and CSS. While this was simply a harmless proof of concept, this could easily be put into the wild and start showing up in spam messages almost overnight.

View the proof of concept here.

This site uses Akismet to reduce spam. Learn how your comment data is processed.